Cupping Therapy, commonly referred to as Cupping, has been around for thousands of years.  It developed over time from the original use of hollowed out animal horns (the Horn Method) to treat boils and suck out the toxins out of snakebites and skin lesions. Horns slowly evolved into bamboo cups, which were eventually replaced by glass. Therapeutic applications evolved with the refinement of the cup itself, and with the cultures that employed cupping as a health care technique. 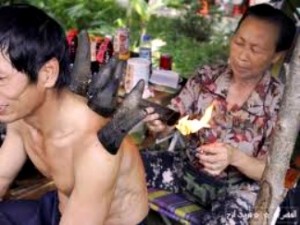 The true origin of cupping still remains uncertain to this day.  Some consider the Chinese to be responsible for cupping, however, the earliest pictorial records date back to the ancient Egyptians around 1500 B.C.  Translations of hieroglyphics in the Ebers Papyrus, the oldest medical text book, detail the use of cupping for treating fever, pain, vertigo, menstrual imbalances, weakened appetite and helping to accelerate the healing crisis.

From the Egyptians, cupping was introduced to the ancient Greeks, where Hippocrates, the Father of Modern Medicine and cupping advocate, viewed cupping as a remedy for almost every type of disease.  In fact, other Greek physicians used the strong suction of cupping to restore spinal alignment by reducing dislocated vertebrae from protruding inward.

The earliest recorded use of cupping came from the famous alchemist and herbalist, Ge Hong (281-341 A.D.), who popularized the saying “Acupuncture and cupping, more than half of the ills cured.”

The Chinese expanded the utilization of cupping to include its use in surgery to divert blood flow from the surgery site.  In the 1950’s, after much extensive research, a collaborative effort between the former Soviet Union and China confirmed the clinical efficacy of cupping therapy. Since then, cupping has become a mainstay of government-sponsored hospitals of Traditional Chinese medicine.

Eventually, cupping spread to ancient cultures in many countries of Europe and even the Americas.  Throughout the 18th century, European and American doctors widely used cupping in their practices to treat common colds and chest infections, often in the form of Wet Cupping.  Wet Cupping, also known as Artificial Leeching and Hijamah in Muslim societies, is where the practitioner makes tiny incisions in the skin to dredge the blood or poisons out.

By the late 1800’s, cupping lessened in popularity and was severely criticized and discredited by the newly established scientific model of medicine. The new model defined medicine by making the body transparent, focusing on and treating the inside, in preference to the outside. Since cupping was a surface treatment, it was inconsistent with this new medical paradigm, which had shifted away from hands-on manipulative therapies.

What is Hijama? Hijama (Cupping) Therapy originated around 5000 years ago. Greek, Arab, Indian, Chinese, Turkish and...