Hijama Birmingham, unlimited cups with every session but within a safe limit & in one sitting. Based in Edgbaston. Our Hijama Cupping price is from £40 depending on the treatment required. Please contact to discuss.

Hijama Clinic Birmingham (cupping) is a method of treatment in which a cup is put on various points of the body and reflex zones usually on the back, abdomen or legs to cause local congestion through a negative pressure created by a special pump. The negative pressure can be also created by introducing heat in the form of an ignited material. Stimulating these zones by drawing blood flow to them in turn stimulates the tissue and internal organs to which the zones are believed to correspond. Also, the cups create minor bruising; this triggers the immune system. Then the cup is removed and a small superficial incisions using a sterile surgical blade are made. The cups are re-placed and a negative pressure (vacuum) is created again. The created negative pressure pulls out the diseased blood out of the body that in turn poured into the cups and then the diseased blood is disposed. This wet cupping is also known as Hijama. Fully insured and experienced Hijama Birmingham clinic. 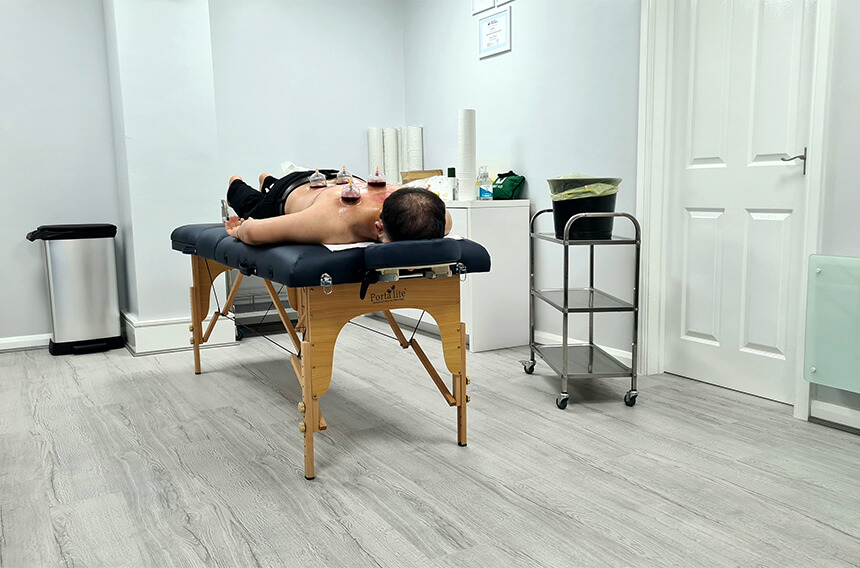 Ancient Egyptians had used therapeutic cupping as drawn on the walls of tombs and temples. Ancient Egyptians were the first to use cupping therapy systematically. Ebers papyrus, thought to be the oldest medical textbook approximately 1550 B.C., in Egypt, describes bleeding by cupping in order to remove the foreign matter from the body.

It is the process in which a cup is placed on specific areas of the body and negative pressure (vacuum) in order to collect the blood in that area with incisions to remove ‘harmful’ blood that lies just underneath the surface of the skin. Wet cupping (Al-Hijama) must be performed by a cupping (Al-Hijama) therapist.


The great prophet of Islam Muhamad (PBUH) had used Al-Hijama on his honourable head for migraine and on his honourable hip joint and back of the neck, lateral sides of the neck and between shoulders. It is mentioned in that recorded by Muhammad al-Bukhari (5263) and Muslim (2952), saying “The Al-Hijama is the best of your remedies”. Jaabir ibn Abdullah reported that the Prophet (PBUH) said, “Indeed in cupping (Al-Hijama) there is a cure.” [Saheeh Muslim (5706)]. Abdullah ibn Abbas reported that the Prophet (PBUH) said, “Healing is in three things: in the incision of the cupper (Al-Hijama), in drinking honey, and in cauterizing with fire, but I forbid my Ummah (nation) from cauterization (branding with fire).” [Saheeh al-Bukhaaree (5681),


Also the angels mentioned to the Prophet that he recommend Al-Hijama to his ummah (nation). Abdullah ibn Abbas reported that the Prophet (PBUH) said, “I did not pass by an angel from the angels on the night journey except that they all said to me: Upon you is cupping (Al-Hijama), O Muhammad.” [Saheeh Sunan ibn Majah]. In the narration reported by Abdullah ibn Mas’ud ”the angels said, “Oh Muhammad, order your Ummah (nation) with Al-Hijama (cupping) .” [Saheeh Sunan Tirmidhee (3479)]

Some of the benefits of our Hijama Birmingham Clinic

Hijama Birmingham is a cure

Al-Hijama is very beneficial in improving the general heath and wellbeing; it is also a cure for a wide range of disease and conditions, for instance;

"prevention is better than cure"